Special events, restaurants and other commercial businesses in the Monterey region of California have found a way to close the compostable waste loop and produce usable electricity at the same time. The electricity is produced via dry fermentation anaerobic digestion (AD) units that came online this spring at the Monterey Regional Waste Management District (MRWMD) in Marina.

The pilot AD project is a public-private venture between MRWMD and Zero Waste Energy (ZWE), a California-based engineering technology firm that markets the SmartFerm dry digestion system. William Merry, MRWMD general manager, met representatives from ZWE at the BioCycle Renewable Energy From Organics Recycling Conference in Madison, Wisconsin in 2011. “For a couple years prior we had been considering the next step in diversion and were interested in AD for organic matter,” Merry recalls, noting that AD could help the District attain higher waste diversion. “We decided to try this small-scale pilot, which was relatively low risk and low cost.”

MRWMD told ZWE that they wanted the AD units, but were not in a position to buy them. It could, however, offer to support ZWE operations staff via tip fees as well as sale of electricity produced at 12 cents per kWh and an accelerated permitting process, which was 15 months from conception to operation. “We felt this AD pilot was an important first step for our community,” Merry says.

It was no small feat to get the equipment to this short stretch of coastline. Four prefabricated, airtight digesters (12 feet wide, 12 feet tall and 40 feet long) were designed, built and assembled in Germany. After being tested, they were disassembled and packed in seven very large containers, and shipped through the Panama Canal to Long Beach, California, then transported to Marina. The pilot project is designed to process 5,000 tons of mixed food waste (70 percent) and green waste (30 percent) annually. “This was an expensive and time consuming venture,” says Dirk Dudgeon, vice president of business development for ZWE. “We did this to prove the technology would work in the U.S. But we knew building and shipping from Germany would not be sustainable. SmartFerm units are now built in the U.S.” 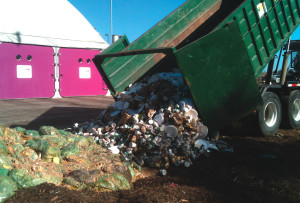 Source separated food waste from commercial and institutional generators is hauled to the MRWMD in Marina. After unloading, the material is visually inspected and contaminants are removed. The food waste is mixed with ground yard trimmings and stored for three to four days in a receiving storage bunker. The bunker is kept under negative aeration, with air treated in a biofilter near the AD units. Feedstock is placed in the digesters with a front-end loader. The digester vessels also can operate under negative aeration to draw air into the biofilter to minimize odors during loading. Each digester unit can hold 60 to 65 tons of material. The SmartFerm system operates in the thermophilic temperature range. Aeration trenches are built into the floor.

As soon as the digester door is sealed following loading, the system operates aerobically until the material reaches 125° to 130°F. At that point, the system switches over to the anaerobic process. The air is drawn out of the vessel and the percolate (microorganism-rich liquid) is introduced via an overhead spray application. For digester start-up, ZWE seeded the percolate tank with liquid cow manure. “Because our technology operates at thermophilic temperatures, PFRP is achieved in the 25- to 28-day retention time,” adds Dudgeon. The percolate is stored in a below ground holding tank of approximately 86,200 gallons.

Two roof-mounted expandable “bladders” store the biogas from the digesters prior to being piped into the combined heat and power unit (CHP). The facility has a 2G Cenergy 100 kW CHP engine. An emergency backup enclosed flare burns the biogas when the engine is down for maintenance and when the biogas is not of sufficient quality to be burned in the engine. All electricity generated by the engine is transmitted to the adjacent Monterey Regional Water Pollution Control Agency (MRWPCA) facility.

Heat extracted from the engine exhaust is used to maintain thermophilic temperatures (151°F) within the percolate tank. After the digestion phase is complete, the digestate is removed from the vessels, blended with woody materials and other green waste, and taken to an existing on-site windrow composting facility currently operated by Keith Day Composting. Percolate is collected and contained within the AD unit, screened for solids and then pumped back into the percolate tank for reuse. So far, ZWE has not had to add water to the system, which has been able to capture condensate (and leachate from the storage bay) and send it to the percolate tank. The system is also operating well below a 5 percent parasitic power load (electricity needed to operate the plant) and conserving the heat generated.

The MRWMD/ZWE anaerobic digester has capacity to process about 120 tons of green waste and 280 tons of food waste per month, with an annual operating cost estimated at $226,908 (including expenses for MRWMD operations, a part-time technician and processing of both waste streams). Based on operating data from May through July 2013, the project reached its highest throughput in May (at 82% of capacity). The average monthly tipping fee revenue was $11,130 (green waste tip fee is $23.50/ton and food waste fee is $38/ton) and the monthly electricity billing maximum was $7,776 ($19.64/ton for electricity revenue), according to Jeff Lindenthal, MRWMD Deputy General Manager for Community Programs. The methane content is 63.5 percent, and there is a 90 percent maximum electricity potential (due to 5 percent downtime for maintenance and 5 percent demand for parasitic load). Staffing needs are 15 hours/week for one operations person.

MRWMD has been pleasantly surprised to learn that they are able to run a higher food waste to green waste ratio than expected — 70 to 80 percent — and that the digestate has revealed no pathogens or trace metals. The digesters will also accept certified compostable service ware — helping restaurants and special events strive for “zero waste.” They decompose after 60 to 90 days in the composting windrows following the approximately four week residency in the digesters.

The digester is supplying about 10 percent of the nearby wastewater treatment plant’s energy need at 12 cents per kWh, and accounts for 90 percent of energy the AD plant is producing. “We wanted to diversify our power portfolio and be self-sustaining,” says Brad Hageman, manager of MRWPCA, which also utilizes its own digester’s power as well as five acres of solar designated for its second tertiary plant. “We also share property and board members with MRWMD so we are always looking for projects to collaborate on.”

One of MRWMD’s ongoing snafus with the digester is feedstock content — not only preventing contamination, but also limiting the amount of less energy-rich “dead stock” from the yard trimmings mixed into the food waste. The District is in need of an optimal yard waste collection route that delivers directly to the digester site during an optimal time for mixing with incoming food scrap loads.

At the outset, the AD operation also experienced some issues capturing optimal electricity output, which led to lower electricity revenue. As a result, MRWPCA had to install a utility grade meter to capture actual electrical performance. In the future, not only does the region hope to expand its compostable materials programs, but MRWPCA may also seek more power for an advanced water replenishment treatment program on the Peninsula. More AD units like the current ones or another power plant project are options on the table.

Food scraps and other compostables have been composted in windrows at MRWMD since 2008. The pilot digester project has increased the waste district’s ability to process more source separated food waste. Today, about 50 Santa Cruz County businesses and 25 Monterey County businesses and dozens of special events on the Monterey Peninsula are diverting their organics to MRWMD.

Starting in August 2012, Waste Management began operating a six-month commercial food scraps collection pilot that is now beyond the pilot phase and has grown to 12 businesses. Monterey City Disposal Services started its six-month commercial food scraps pilot in November 2012. This program is also now permanent and has 11 subscribers. Those bringing their food scraps and other compostables to MRWMD include individual businesses such as Whole Foods in Montereyas well as Peninsula special events like the Big Sur International Marathon (BSIM) and Half Marathon. At its 2013 event, BSIM was able to accomplish approximately 96 percent waste diversion.At the Community Hospital of the Monterey Peninsula (CHOMP), employees asked management to pursue environmental sustainability, as CHOMP is the largest employer on the Peninsula and healthcare is known for its large waste footprint. Alicia Molina, an executive assistant at CHOMP and a leading member of the Monterey Regional Compost Coalition (a group of local businesses, nonprofits and industry stakeholders instrumental in pushing for commercial food scraps collection routes in the region), says the management support at CHOMP has been crucial to a successful program. “We also started small by beginning with food dehydration, so separating food waste was already part of the daily routine,” Molina reports. “Our next challenge is to capture even more scraps beyond just the food prep areas. There is huge potential.” CHOMP’s prep areas alone generate fifteen 64-gallon carts of food scraps weekly.